All the aspirants who are preparing for NDA 2022 can download the notes for each subjects and topics and also some important PDF that can boost your preparation of NDA(National Defence Academy) 2022. Here you can download notes for Mathematics, English, Physics, Chemistry, History, Politics, Geography, General Science etc. 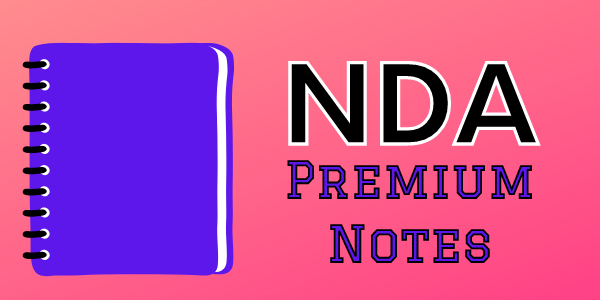 UPSC (Union Public Service Commission) conducts the NDA examination. It is a national level entrance test. The UPSC NDA exam is conducted to recruit candidates in the Army, Navy and Air Force. This exam is conducted two times in a year, i.e. NDA I and NDA II.

Preparing for NDA? Don’t forget to join our telegram channel where you get important stuff of NDA & SSB exams. To Join CLICK HERE

Well, As per the pattern Mathematics have the highest weightage but you can not clear NDA by focusing in one subject only. You need to study all the subjects properly.

Answer is defencewallah.in This website dedicated for cadets preparing for defence exams, here you can get more important stuff for NDA.