Notes on Anatomy of Flower Plants Tricks and point to remember 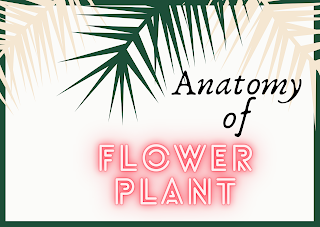 🥀🌾Notes on Anatomy of Flowering Plants🥀🌾

Depending upon distribution of stomata, the leaves are :

(iv) Trichomes: These are epidermal outgrowths present temporarily or permanently on almost all plant parts.

(i) Cortex: It lies between epidermis and the pericycle. The cortex is distinct in dicotyledons but not in monocotyledons where there is no clear demarcation between cortex and pith. It is further differentiated into :

(b) General cortex: It consists of parenchymatous cells. Its main function is storage of food.

(c) Endodermis (Starch sheath): It is mostly single layered and is made up of parenchymatous barrel shaped compactly arranged cells.

(iii) Pith or Medulla: It occupies the central part in dicot stem, and monocot root. It is mostly made up of parenchymatous cells. in dicot root pith is completely obliterated by the metaxylem elements. In dicot stem the pith cells between the vascular bundles become radially elongated and known as primary medullary rays or pith rays.

(i) Radial: The xylem and phloem strands alternate with each other separated by parenchymatous cells. such kinds of vascular bundles are called radial and found mainly in roots.

(a) Collateral: A vascular bundle in which the phloem lies towards outerside and xylem towards inner side, is called collateral, e.g., Sunflower.

(b) Bicollateral: A vascular bundle having the phloem strands on both outer and inner side of xylem, is called bicollateral. e.g., Cucurbita.