Alakh Pandey sir revealed big news for NDA aspirants. NdaWallah Batch on Physics Wallah(PW) Platform is going to be released from 15 August 2021. The batch is for NDA preparing students. However, he doesn’t explore many things about it. But it is sure that this course will be FREE for everyone. 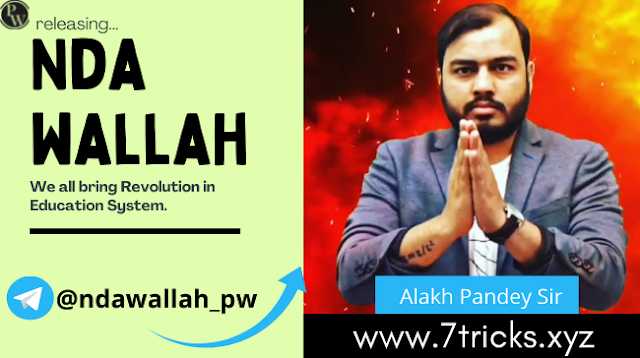 He said in the video,” We want a revolution in the education system but the revolution will come after teaching IIT JEE or NEET aspirants? No, I don’t think so. So we announced Competition Wallah, And today after Competition Wallah we are announcing NdaWallah. And from 15 August 2021, our NDA team will be in front of you. Also, One important thing that I want to tell you is that this course will be FREE of cost.

You can join the Telegram channel of the Nda Wallah batch to get the latest updates, video lectures and notes of NdaWallah:-

He is the gem who enlightening the nation with education, and because of him soon our great country 🔥 INDIA 🔥 became the most literate country in the world …👍

This man deserves a huge salute in front of the whole world….. He is the real teacher… And for us, Physics wallah is not just a platform to study it’s a way to our dreams… Huge respect for Alakh sir and Physics Wallah..🙏🙏😍😍

He is such a diligent guy who brought everything from the bottom to the top and providing education free of cost or at least fees so I would like to salute him for his gratefulness to students thank you so much sir, Jay Hind, may you live long!

I am lucky to be part of the process of seeing this man grow from nothing to one of the most popular educators in India.

I am so lucky that  I got this type of teacher and really he changed my mind the day the first time I meet Sir’s channel and now I am serious about everything. 😚😚love you sir and all physics wallah teachers.

From a single small room with no AC to building up his own office and employing teachers over, there is been a wonderful and great journey for us and for him too 😀. A true source of inspiration for many from having nothing to having everything 😀😀 the only man who has started this revolution long ago and now he’s receiving his result of hard work and many more have joined him to support free or at min price-quality education in India….. This is what MADE IN INDIA ❤️ #Education_empowerment 💪

It is the fortune for all the students that a person like you came into this world and revitalised the hope in their minds that yes you can definitely reach the top engineering and medical colleges and your financial condition will not become a wall in front of your dream college.

This person must be protected at all costs and his achievements must be told till the sun dies, which alone is enough to change the entire world. Love u, sir♥. I seriously don’t know how the hell was I surviving before I found u. Thank u uncountable times. You are no less than God…….

Alakh Sir are the hope of Students who can’t afford high-Quality Education, he owns states that education should be free of cost or at its minimum cost. We are greatly thankful to Alakh Pandey Sir.

When will Nda Batch will start?

Physics Wallah (Alakh Pandey) announced in the video that the NdaWallah batch starts on 15 August 2021.

Is the NdaWallah batch FREE?

Yes, Alakh Pandey sir said in the video that the NdaWallah batch will be free for everyone. He wants to bring revolution to the education system.